on September 26, 2013
So the promised Indian Summer arrived on Sunday, just in time for the Castleblakney 8K race. Initially I was delighted to see the clear skies and feel the heat of the sun on my face, that was until we arrived out at the start line about an hour before the race and I was already sweating... Myself and Gordon has signed up to run it but we had plenty of pre-race banter with Michelle, Paul & their boys before the race kicked off. 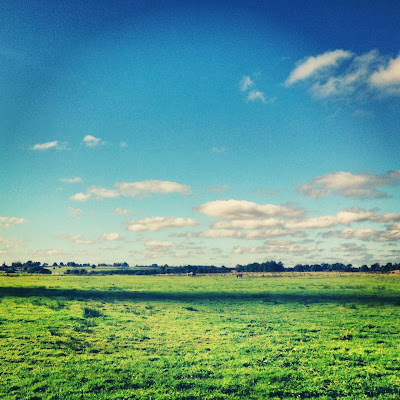 There was a real lovely pre-race vibe around the village as we all gathered to watch the kids race take off. I will admit a slight pang of jealously when I saw the kids crossing the finish line after 2 minutes running but have to say it really is great to see! Having not grown up in or around sports, I've never seen that side of sport before (probably because I used be the one sitting in the car playing my Game Boy or the one standing in the shade eating a cone) but I think it's great to see kids up and moving. (Oh oh - Have I become like one of those militant reformed smokers now?).

After the kids race, myself and Gordon headed down the Ballymac Road to the Start Line where we stood in the sun regretting the fact we didn't have any sun-cream on. It was here, half way down a country road on a Sunday afternoon in September that I had my first encounter with someone who reads this blog (Hi Niamh!). I was so chuffed after the conv ended that Gordon was afraid I wouldn't be able to run over the Start Line due to my inflated head. I however think Gordon is just jealous... 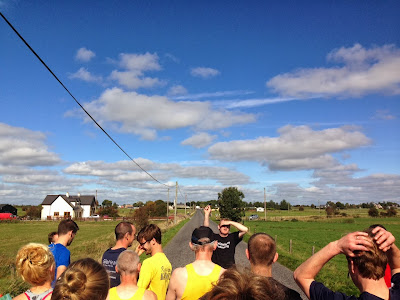 The race kicked off bang on 1pm and boy was it a hot one! By the time we hit the 1K mark, I was already sweating buckets. The race brought us out the Monivea Rd and back around into the village. Although it was a race, I kind of felt like I was running the thing on my own as there wasn't many runners around me. I could see one or two in the distance, and no-one ever passed me out. I later found out this was probably due to the fact there was about 120 runners taking part, it just looked like a lot more at the start line.

The water at 5K point was a great relief as I felt it charged me for the last 3K. I knew by my time that I was going well (all under 4:30/km) but the heat was something else. Sweat was stinging my eyes but I kept on trucking. When I re-joined the main road about 400m from the Finish Line, I took off at speed only to have started too soon and I ended up being pipped at the finish line by another guy. I really need to learn when to go for it and not just fire ahead as soon as I see the finish line.

I finished 13th (unlucky for some!) in the race... I don't think I've ever finished that high in anything before! My official time: 36 minutes 23 seconds! That makes me 2 minutes faster than the 8K I ran at the beginning of August [Streets of Galway]! Epic. I feel I could have pushed myself that little bit harder but my legs still weren't fully charged after Fridays 32K so I suppose I'll give them a break. 40K in one weekend is more than enough road-coverage for me. 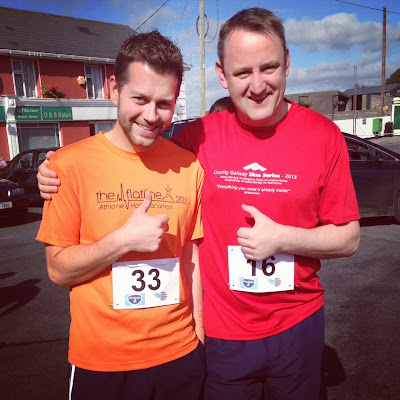 Myself and Mr G

All in all, it was a great race, lovely day, great village and loads of supporters cheering us on as we approached the finish line. The best part of the whole day was going back to Michelle's where she had cooked a fab Sunday dinner for us to recover. I don't know if I was happier to see the Wine or the Rice Krispie Buns but either way it was much appreciated :) Thanks Michelle!
8K Castleblakney Galway Heat Indian Summer Pace Race Running September