The Flatline - Athlone Half Marathon

on September 15, 2013
Following the Rock & Roll Half Marathon in Dublin, I had my eye out for something to fill the twelve week gap to the Dublin City Marathon. That was when I found The Flatline in Athlone conveniently located both half way between Galway & Dublin and half way between August & October. Registration was a bargain at €20. I do wonder sometimes about the prices charged for some of these races, as I was looking at the Galway Bay Half (end of September) which is coming in at €45. Feic that... This running malark is more expensive than a drug habit, that being said, I am like a magpie and can't resist shiny new medals.

I've been having a bit of a low-motivation week this week; I can't put my finger on it just something I can't seem to shake off. I was hoping this Half would kick start me back into gear. This week I've covered my lowest amount of milage in weeks - so in my head I've said I was 'tapering down', but in reality I am just being a lazy git. Despite this, I turned up at the start line yesterday morning feeling quite optimistic and well prepared for the race. 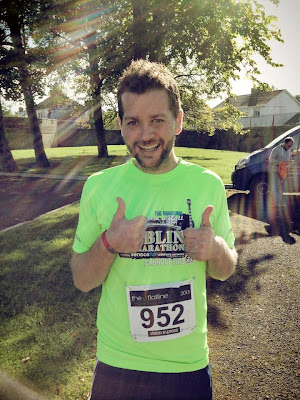 I have to say, the organisation of the entire race was brilliant. There was a pre-race meeting where we were told where the water and gel stops would be along the course and general guidelines about throwing rubbish in the drop-zones etc. I have to say this most definitely felt like the most organised race I have ever been to. As everyone was in the school (St. Aloysius) grounds, they asked people to group around their projected finish time by standing with their respective pacer (2.00, 1.55, 1.50, 1.45 etc) 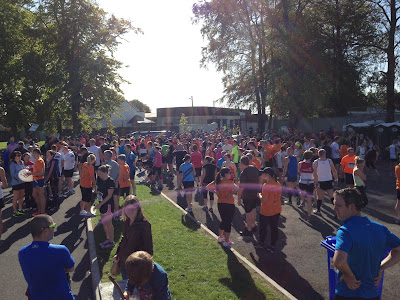 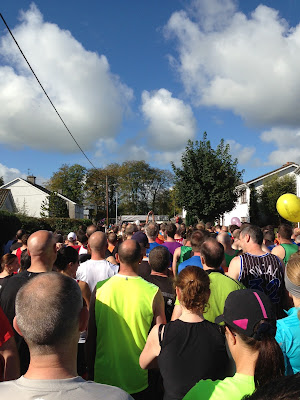 At the Start Line...

The race started bang on 11am and off I took... I knew in order to meet the 1:45 finish time, I would be required to run at just under 5 minutes per km which is a pace I am comfortable with on a 5/10K but have never kept up for a full Half. Again (I reckoned), what is the point in doing something unless you are going to give it your all, so I figured I would give it a try.

The first few km's were the usual - crowded and spent running around people/dodging groups, but I kept my eyes on the 1:45 balloons and kept trucking on. You couldn't have wished for better weather for the race - it was dry and warm but not hot. There was a little breeze which occasionally would blow, cooling everyone down sporadically along the route, kind of like one of those spray mists you find outside shops in Spain.

Every time I run, I always learn something new about myself or about racing. Today was no different. I spent the race running with the 1:45 pacers - I have never run with pacers before, I used to always err on the side of caution - so if I wanted to finish in 2.00 hours before, I would start in front of them (1.55) and make sure I never saw them again. This time around, I ran with the pacers for my projected time and found I wasn't alone with that plan.

As we ran around the country roads of Clonown, you could see a fair bit in the distance. The pacers seemed to have swarms of people around them while the runners were more sparsely spread out in-between. That being said, the benefit of running with the pacer meant that I always stayed with him in my sights... pushing me to keep up at all times.

The race just seemed to fly by... 5K, 10K, 15K. It's funny the things you think about while you run. I either spend my time working out exactly what percentage of the race is left to do e.g. "I have completed 5 of the 13.1 miles so I am '5 divided by 13 multiplied by 100 over 1' through the race" (The answer is 38%). I also spent my time contemplating how far I have come. Who would have thought that a Half Marathon would just be something I would/could do - and as I am all about self improvement, I spent the latter half of the race making lists of 2014 goals and what I would like to do next year. 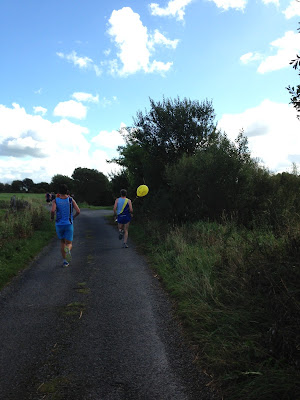 As we passed 11 miles, the pacer was still in my sights but the crowd had dispersed a little. I have to say, the pacer was absolutely amazing. He was chatting to all the runners as we ploughed on towards the finish line. I remember at one point he said "Come on, 12 more minutes and you'll be finished... Keep it up" - and that really stuck with me. I always think about my runs in terms of distances so hearing something defined in terms of time changed my thinking to "Thats only 3 more songs". With that in mind, I hit skip on my iPhone and Lady Gaga came on to turbo charge my finish.

I over-took the pacer at around 20K (Sorry Mr. Pacer!) and when I saw the sign saying '400m to go', I put my foot to the floor and sped around the corner to see the finish line in sight. The clock was seconds off 1:45:00 so I floored it, crossing the finish line just before the clock hit the time I had set in my head as a finish target. 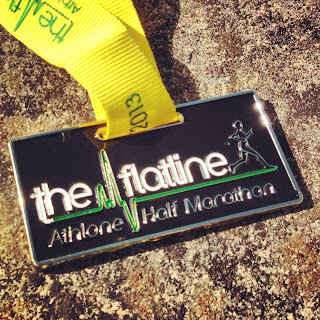 Another Medal for the Wall...