on May 15, 2013
In a week of unpredictable weather, I saw a mixture blue skies, heavy downpours and gusts of wind from my desk as the day progressed. The sky seemed to clear as I left work at 6pm to head home and get ready for the Loughrea stint of the Galway 5K Series. 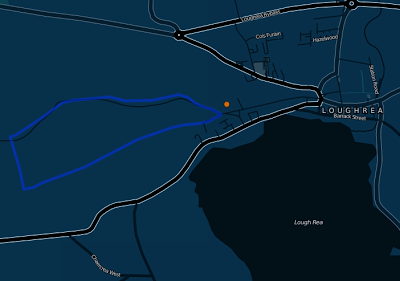 We have been taking it in turns to drive to the race venues (because we're environmentally conscious like that) and tonight was Sinead's turn. Brad was running a little late so when he arrived at 7.10 we set off on our way to Loughrea - only to be haltered at the first hurdle... The bloody level crossing in Oranmore. 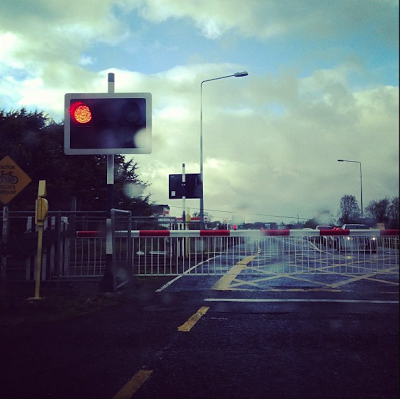 Now what harm is a level crossing you might think? Not if you know this one. It's even been in the local newspaper this week for it's excessive 'down time' (link here: http://www.galwaynews.ie/31431-call-tackle-delays-oranmore-rail-crossing). We waited... and waited... for 10 minutes! When the train finally passed we took off on the motorway out to Loughrea.


The closer we got to Loughrea, the darker the sky became. As we came off the motorway, the skies opened and it started lashing. It was now 7:52, we had 8 minutes to find parking and get to the start line. This was entirely the level crossing's fault. The only advantage to being in the car was that we weren't standing at the start line in the rain - but it was still a little bit stressful. We abandoned the car in Loughrea as the traffic (and rain) was so bad and ran (yes RAN) over 1K to the start line. We joined at the back of the waiting runners at 7:59. We hadn't 30s to catch our breath when the race started. Being at the back sucks.

The first kilometre was spent jumping over puddles and swerving around other runners who were avoiding puddles. It seemed a lot of the girls were screaming as they were getting splashed or had to tip-toe through some of the puddles while the guys were just ploughing on straight through any water on the road.

The route was quite narrow which also slowed everything up at the beginning but by keeping my head down and having Olly Murs singing to me (I remembered my earphones tonight!), I found myself out of the muddle of runners and had some space as I crossed the 1K marker. The rain continued to belt down for the next K while we found ourselves running straight through large puddles as the entire breath of the road was water-logged. I soon found out why.

The rain stopped shortly after 2K and that's where the route went uphill - that explained the volume of water at the earlier parts of the course as it was all coming back downhill. 2K to 4K was uphill which slowed me up a bit but I kept persevering. At the 4K marker, the road (and finish line) came into sight and it was all downhill from there. 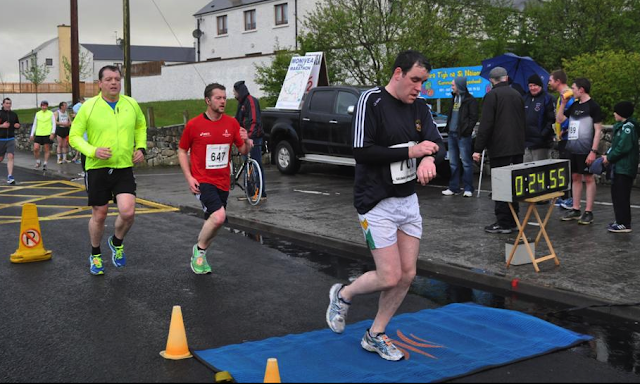 I upped my pace and crossed the finish line before 25 minutes on the clock. My chip time was 24m 34s - the exact same time as I got in Athenry three weeks ago. I was delighted. In our post race analysis - despite us all being soaked to the bone, we really enjoyed it! The puddles and rain added a little bit of excitement to the whole thing and the course was lovely. 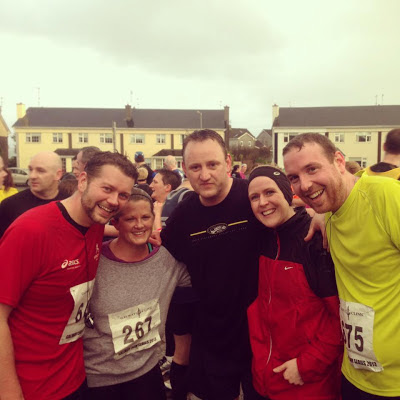 While I didn't break a new PB (hey, you can't win them all), I was well chuffed with my time especially considering we cut it close to even taking part! Next week, the Galway 5K Series rolls into Craughwell. It would be nice to not have to sit in the car on the way home with wet boxers next week. C'mon sun, it's May FFS :)
5k Bradley Galway 5K Series Gordon Loughrea Race Race 3 Rain Running Hills Sinead Wet Yvonne