The Clare Burren Half Marathon

on May 25, 2013
My alarm went off at 6.15am this morning but I had been awake before it went off. I didn't sleep too great last night with nervous apprehension of today's Half Marathon. I got out of bed, had my porridge for breakfast, showered and got ready. Brad, Cathal and Aisling were up by 6.30 and we all had a quick chin-wag and coffee before loading up the car and heading off down to Ballyvaughan by 7am. 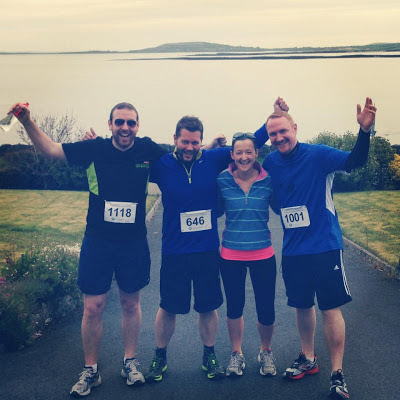 Brad, Me, Aisling and Cathal

Brad and Cathal were running the 10K, I was running the Half and Aisling was walking the Half so we all assembled at the start line at about 8.40am after picking up our registration packs and parking the car. The start line was full of people buzzing while a DJ pumped out some tunes to get us psyched up for the race ahead.

The only annoying part of the whole thing was the way the race started. When the fog-horn went off, everyone started at the same time. Runners, Walkers, Joggers for the 10K, Half and Full Marathon. I spent the first kilometre avoiding people with walking sticks and children as we ran through the village of Ballyvaughan. There had been no clear directions so as we ploughed on (at around 3K) I was still unsure if I was on the right route.

Around 4K signs appeared splitting the 10K'ers from the Half and Full Marathon routes. That was when we went off the road for the first time and took off uphill through a dirt track. At the top of the dirt track, the route winded uphill actually giving us a beautiful view of the Burren. I had to keep slowling myself down to match my planned pace (5m 30s/km) as I was afraid I would kill myself out too early on in the run and burn up my energy too soon.

We continued to climb at a steady pace until around the 9K mark when the Full Marathoners were split off from the Halfers. It couldn't have come at a better time as the Full guys were continuing on uphill while I could see we had a lovely downhill bit lying in front of us. I had always thought that the downhill parts would be nice but I was wrong. They are nearly worse. As we were on dirt tracks, I spent more time looking down at the loose rocks and stone to avoid going over on my ankle.

I was happy to see the road again at the half-way point as I managed to pick up some time there that I had lost on my uphill parts earlier on. This didn't last too long though because as soon as we hit the 12K I could see the uphill windy path which lay ahead of me. I took water at the water station and walked for about 30s as opposed to trying to run uphill drinking water (which had resulted in me half drowning myself at the previous water station).

I knew from looking at the course profile that once I hit 15K the route went downhill and on to the main road, so I figured I'd suck it up and plow straight into the uphill 3K in front of me. Jesus it was killer. Again as we ascended I couldn't help but admire the surroundings. This is the sort of stuff American Tours would spend a fortune on but as we were off-road, I reckon they never see!

At the top of the uphill section, we ran about half a kilometre across the top and I couldn't help but think how beautiful the place was. Scattered with little purple flowers and a stone walls, the whole place reminded me of the Wall from Stardust. It's the sort of place I would love to revisit (walking) and bring a camera as the place was just beautiful. 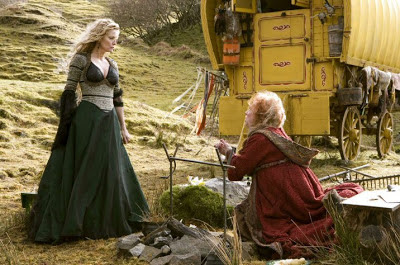 Stardust or The Burren?

The biggest surprise of the whole race was still ahead of me. We ran from over 200m elevation to 0m over about half a kilometre. It was like running down from the top of Croagh Patrick. The route was wide enough for one runner so it was difficult to overtake the person in front. It was actually the slowest part of my whole race (my pace fell to 8m 30s for that kilometre).

I was never as happy to see the road again at the 16K mark. I really picked up the pace then (probably thanks to the 'slow' previous kilometre) and just went for it. 17K has been the furthest I had run before so I took huge strength from the fact I was running longer than I had ever done before. Passing the sign announcing that we were back in Ballyvaughan was like music to my ears. I could see the pier getting closer so I knew the finish line was also getting closer.

I finished my first Half Marathon in 2 hours, 1 minute. Flipping delighted. I had set myself the goal of finishing it in 2 hours so you can't get more bang on than that! The best part of the race was seeing the guys waiting for me at the finish line (Poor feicers had been there since they finished their 10K).

You can see from my Running app below the slowest parts were the uphill (6K to 9K and 12K to 14K) with the slowest part being just after 15K were we went downhill to the road (16K). The Blue line at the bottom shows the elevation while the green line shows my pace. You can see the two biggest dips in pace were the up-hill and down-hill battles. 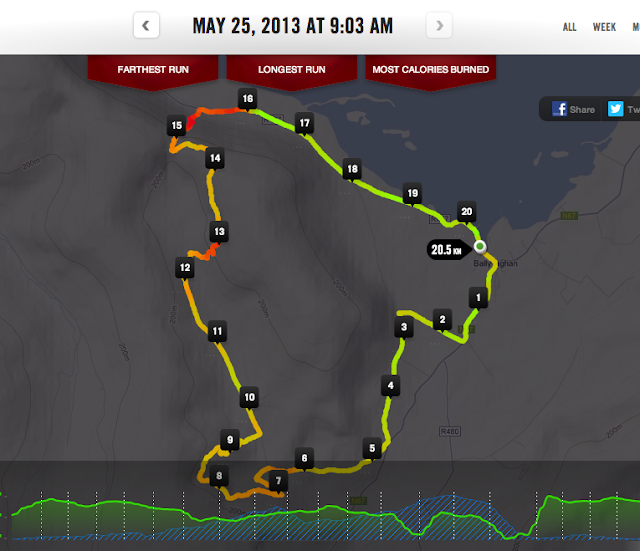 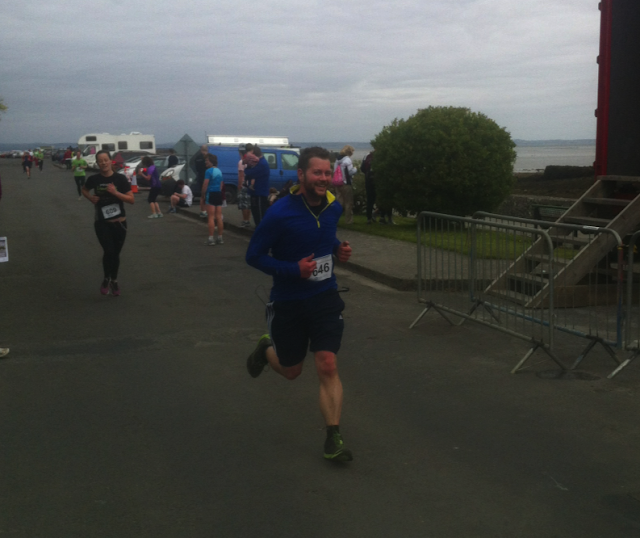 Me coming in to the Finish Line

All in all... I'm ecstatic! If someone had told me this time last year that I would run a Half Marathon - I would have laughed in their face while munching a Mars bar or something. I'm absolutely over the moon. The biggest problem now however is... I need to beat my 2:01:10 time which means... I need to find another Half Marathon (preferably a flat one) so I can beat my time :) I'm never happy. 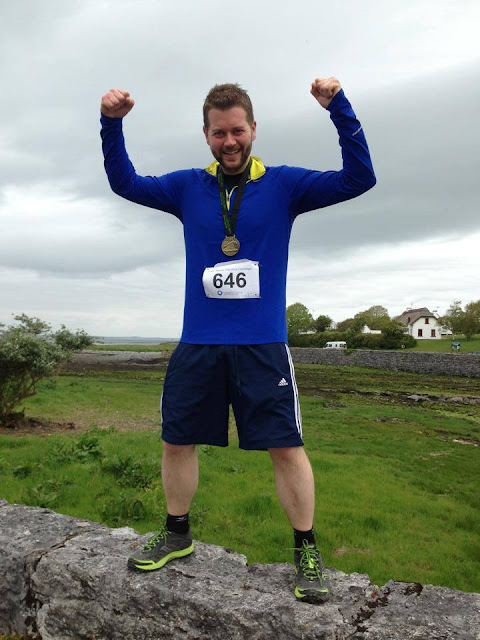