There are plenty of difficult obstacles...

on May 16, 2013
Yesterday evening I got an email from the Clare Burren Half Marathon organisers with the race information for next weekend and something funny happened... A little flash of self-doubt flickered across my mind and hung around for some time like a lingering bad smell. I don't know whether this has been fueled by some other peoples comments on how hard/not nice the course is meant to be or if it came from somewhere deeper inside me.

Up until this point, I have always had the frame of mind of 'Of course I can do it' but now, with just over a week to go to the event I am starting to doubting myself and my ability. The furthest I have run up to this point is 15K - and that was only one time! I haven't come near it since. I had set myself a private goal of completing it in 2 hours, but after a friend who had run the course before said "add twenty minutes" to that - it kind of scared me. 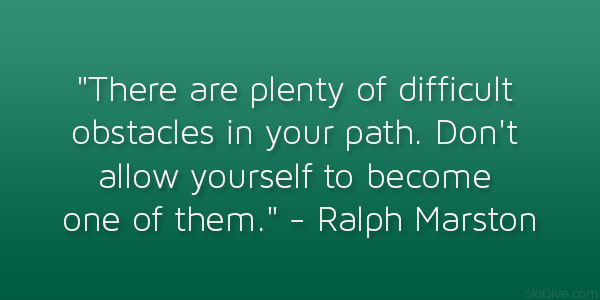 As I was driving home late last night, Niall Boylan (4FM) was blabbering away on the radio (I love tuning in to catch some of the crazies on his show) and he was talking about weight. A 24 year old 24 stone guy rang in from Cork who spoke defeatedly about his weight and how 'he had tried everything but never lost a pound'.

My heart went out to the guy, probably because I had always felt like that guy and could identify with his struggle! Niall asked him what his daily food intake was like which he justified every way possible in a similar light as I used to. He said he didn't have time for a breakfast, his lunch was quickly grabbing a hot chicken roll (and a Diet Coke) and for dinner he ate less than his 11st brother - so he couldn't see where he was going wrong.

All I could think of while listening to him talk was how these were all my excuses in the past. I am by no means saying I am a role model or source of guiding light for him, but it made me think about what I had previously thought as impossible or too large a challenge (i.e. losing weight) and the excuses I had used in the past such as:
Thinking about it now, I can see a million miles off that these were all lies I had told myself that were being driven by my overall defeated attitude toward my own weight & body size. I've said before how I had found ways to trick or fool myself around the fact I was over 19st such as in the way that I hadn't weighed myself in over a year and I only uploaded pictures of me to Facebook which were from the neck up or of me behind something/someone.

This phenomenon is called 'Cognitive Dissonance', which (here comes the science) is "the discomfort experienced when simultaneously holding two or more conflicting thoughts". When we have a discrepancy between beliefs and behaviors, something must change in order to eliminate or reduce the dissonance. A perfect example of this is the fact that I smoke. Smokers know smoking isn't good for them in any way shape or form. Smoking costs a lot of money. Nothing good has ever come from smoking. So why do I smoke? I had always told myself I would give up by the time I was 30. I'm now 30. I've now told myself I know I will give them up "soon" yet don't have a time frame on how soon soon is.

Anyway, I'm digressing from the point, my realisation in the car as I listened to the 24 st guy from Cork was that all I wanted to do was phone up and tell him he would be ok, that he could make a change and that he would surprise himself if he wanted to. That was when it hit me. Why am I doubting myself before I've even taken off from the starting block...

If I run 15K (which I know I can do) and walk the last 6K (which I know I can do), so what! I'll still have completed a Half Marathon. I'll have a finish time which I can work on and try improve on over the next few months/years. Everyone has to start somewhere and next weekend will be my first Half Marathon, my baseline. I've made a plan for this coming weekend and I am going to attempt to run 18K in a single run. If I don't do it - I'll know not to push myself that hard next weekend.

I can learn from my mistakes OR I can making an excuse to avoid experiencing something in order to avoid a possible mistake in the first place. I could not take part in the race, I could change my registration back to the 10K run, I could focus my energy on my self doubt, growing it to a crippling size.

Next weekend I AM running my first Half Marathon.