on August 15, 2013
The photo I posted in my previous post of my last pack of cigarette's was indeed my last pack of cigarette's. On Tuesday evening, we called to friends who cooked us a delicious BBQ. I spent the evening nursing my box of Camel Blues ensuring I would have enough to last the night as once it was gone, that was it! I left my friends house after midnight with one cig left in the box. I woke up yesterday [Wednesday] morning before 7am. 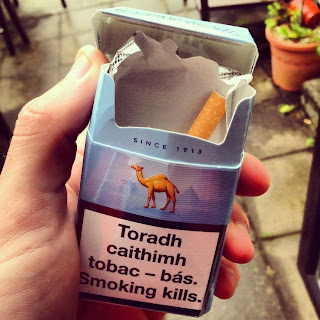 My last cigarette... Ever!


I smoked my last cigarette just like I would smoke any other cigarette. I didn't love the experience, there was nothing special about it. Why that cigarette was chosen to be the most significant cigarette I'll encounter all year, I'll never know? I can tell you though that there was nothing at all significant about how it made me feel smoking it. It didn't give me super powers, it didn't clear my mind or give me strength. In 90 seconds or so it was gone and I threw the butt in the ashtray out the back without a second thought. That was it. There will be no lamenting from me.

The usual morning routine continued as normal - I drove to the office, worked, had my breakfast, worked, went for coffee break, worked, waited for the lunch bell to go off, went for lunch, came back at 2pm, worked, went to a meeting, worked, had another coffee, worked, went home. The day passed like any other. I did find myself thinking more about being outside as opposed to having a cigarette outside. So when I would phone my other half, I still went outside to make the call.

I had planned on buying some form of Nicorette but thanks to a lot of different feedback from a lot of people, I have decided to wait and just see what works for me. A lot of people seem to have gone cold turkey and attribute its success to the lack of dependency on nicotine (which apparently only takes 3-5 days to be fully gone from the body). I'm not going to deny myself anything. If I need a patch, I'll get a patch. If I think the inhaler, gum or spray might help then I'll buy them but for now I'm happy out just seeing how it goes. 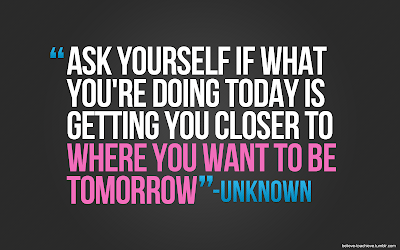 What has been amazing has been the amount of messages on Twitter/Facebook I've been getting. Each one has made me smile. You'd swear I was coming off cocaine or something but I really do appreciate every single message. My favourite has been the text I got from my Nana just before I left work at 6pm yesterday which read: "Hope you're hanging in there John. Best of Luck. Xx". Sweet. Simple. Perfect.

I left work and headed straight for home where I got changed and went out for a run for an hour in the rain. I spent the entire run just imagining how much easier this is going to be (running) with clear, clean, healthier lungs in a couple of months time. By the time I was home and showered it was 8pm. We had dinner and watched some TV before scooting off to bed at 10.30pm where I had one of the worst nights sleeps ever. I don't know if it was warm (even though it didn't feel it) or if it was the lack of nicotine but I saw 1am, 3am and 5am on the clock before getting up at 6.30am and heading out the door to Bootcamp at 7am.