The Amazing Run that Drained Me...

on August 25, 2013
My marathon training is in full swing as I have been following the plan for the past three weeks. This week's LSR (Long Slow Run) was set for to be 18 miles (29km). The purpose of these LSR's (according to the program) are:

All in all, the LSR is classed as the most important run in any training program. Last weekend, through one thing and another, I missed my LSR (which was scheduled for 26km/16 miles) so ended up doing it Monday evening after work. Monday's run was great - I really felt like I could have kept going at 26km but it was starting to get dark (9pm) and I hadn't eaten dinner yet, so I happily finished up bang on target at 26km last Monday.

This weekend's LSR was for 29km - but I got cocky and the run ended up biting me back. I had planned on going for my run yesterday (Saturday) morning but as I haven't been sleeping that well since giving up the cigs, I ended up watching Pan's Labyrinth instead of sleeping Friday night/Saturday morning. So when I woke on Saturday, instead of going out for my run, I went to Bootcamp for an hour instead and pushed off the run.

After Bootcamp I had breakfast and went about my usual business. I decided to go into town and meet up with my brother who was visiting Galway for the weekend. I grabbed a soup for lunch and then we sat in a pub chatting with his friends and I drank a lot of coffee (3 cups). I also got this amazing cupcake which totally deserves a shout out: 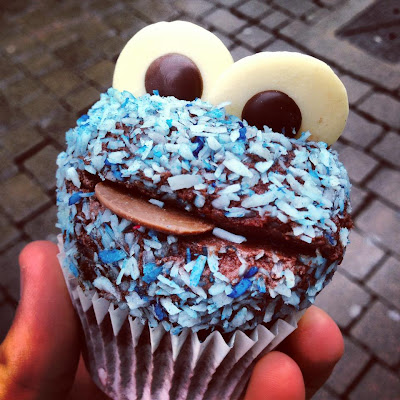 I got home from town about 4pm where my other half kindly reminded me that if I wanted to get my run in, to do it now as we were going to the afters of a wedding so we were aiming to leave the house about 9pm. With that in mind, I got changed, warmed up, packed my gels and water and off out the door I went just before 5pm.

I knew the route I was taking in my head - running from Oranmore to Craughwell and back. I chose this route as it was raining and visibility was semi-poor. My route choice was wise as it was along a main road with no crossings required, there was a large hard shoulder and I knew I would be passing a restaurant around the 9km and 20km marks so if I needed, I could pop to the loo (The things you have to plan for when running is crazy).

The first half of the run was super. I passed a motorbike cannonball type thing where a lot of the riders either flashed, waved or beeped me (probably because I was the only person on the road). I got to check out a lot of fancy houses that you never see when driving as they are off the road. Anyway, I'm digressing...

I think I have a problem with the gels/goos runners are meant to take on long runs in that, I don't really like them and don't think they work (for me). Anything less than 10km is fine, so the first time I used them was in training for the Half Marathon back in May - and then I was only using 1 gel pack. I would have half the 60ml gel at around 8km (45mins in) and the rest at 13km (1hr 15mins). I decided for todays run I would repeat the same format and have half at 45mins and then half every 30mins after that. My plan was simple: 45mins, 1hr 15mins, 1hr 45mins, 2hrs 15mins - and then run on home.

What actually happened was quite different... I had half at 45mins but found the second half at the 1hr 15min mark really threw my stomach off. I felt like it was repeating on me from that point but I carried on running. I hit Craughwell just before 1hr 30mins (15k) so I doubled back and headed home. As I had been in town earlier, I hadn't a chance to fully recharge my phone so the battery was down to 20% at the halfway point. 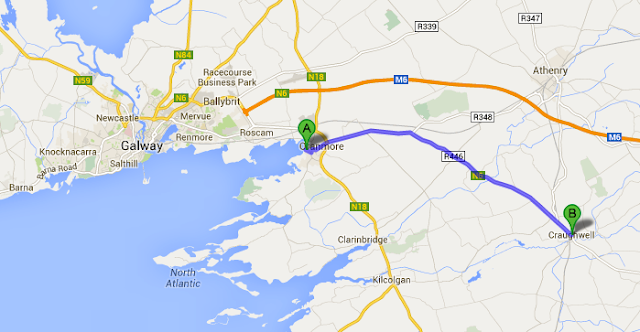 In order to preserve some juice to save my run, I turned everything off, including my music and I just kept on running. At 1hr 45mins when I should have had the first half of my 2nd gel, I didn't. Not because I forgot but because I was still refluxing from the first gel half an hour previously. I said I would keep going until 2hrs (20km) and I would have it then. When I opened the gel, I had the gawks trying to get it in to me, so only had a bit and figured I'd keep sipping away at it as the rest of the run went on.

I never had the 2nd gel - partly because I couldn't but also after I had opened the gel, it oozed all over my pocket - gluing the pocket net to my leg and leaving my shorts with a really suspicious goo stain! I simply kept on running. When I hit 26km I gave myself a little 'woop' (mainly because the road was quite and no-one but the cows would hear me celebrate) as anything from 26km onwards was new territory for me... I pushed hard - probably harder than I should have... 27km (woop), 28km (woop woop), 29km (scheduled finish)... 30km! (wooooooooooop!) 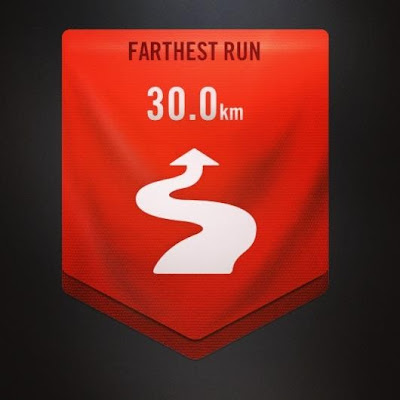 THIRTY KM! That's like, 75% of the Marathon with 9 weeks to go! I was so proud of myself. Of course my calves and hamstrings were screaming out but that didn't matter. I had a 30km run under my belt! The best thing was I clocked it in just under 3 hours (that's what I mean when I say I pushed myself at the end). I cooled down, stretched, showered and came downstairs ready for dinner and then to head off to the wedding. 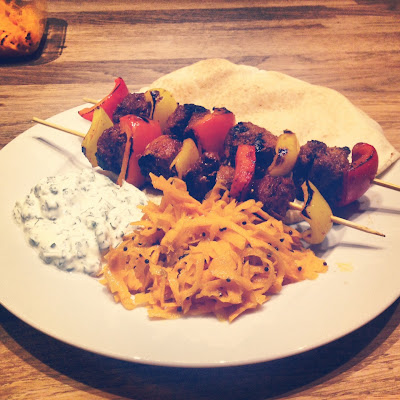 Sitting down for dinner was when the first wave of nausea hit me. I thought I was going to throw up. I just sat looking at my plate much to my other half's bewilderment as usually I'm first in. Upon taking a single bite, I ran to the bathroom where I thought I was going to throw up. That's when I got the shakes and felt completely weak. I returned from the bathroom a different man from the one who had come in the door 20 minutes previously delighted with himself.

I was completely drained.

That was when I turned to everyone's favourite Doctor - Google. I diagnosed myself with dehydration and loss of electrolytes. My only source of fluid while I ran was from my water bottle (I didn't have any sports drink with me). I figured I needed to get something into me - so I made a bowl of Museli which seemed to go down but I still felt like I needed to throw up. I was still shaking and cold.

I made a bowl of salted popcorn (as I read online that it is an easy way to replace lost salts) and continued to re-hydrate. At this point I was in no fit state to be going to a wedding. I encouraged my other half to go as I was only fit for bed as I felt completely and utterly drained. So that's what I did. Instead of dancing the night away having the craic and a few scoops with friends at Laura & Jason's wedding... I went to bed.

Yesterdays Lessons Learned:
I suppose this is the key function of the LSR which isn't mentioned in any plan - trail and error. By pushing myself and my body to new ground, I am going to have to learn how to adapt to running for 3+ hours at a time. A LSR is completely different to heading out for an hour after work. Most literature will tell you that any run less than an hour doesn't actually require any calorie intake as your body can work with reserves.

I will learn from this - I'm just peeved with myself that my longest ever run (which actually felt quite good) ended up in me missing a friends wedding :(