The Rock & Roll Dublin Half Marathon

on August 05, 2013
I had signed up for the Rock & Roll Half Marathon the day after I had finished my first Half Marathon (back in May) - Yep, I must be glutton for punishment. Having finished the Clare Burren Half in just over 2 hours (2h 1m 10s), I was keen to keep on going and continue to try to improve. The Clare Burren had been tough on my knees but I wasn't going to let that stop me - hence why I signed up immediately for my next Half challenge... Which was today!

I headed to Dublin on Saturday (hungover) and collected my race pack on Sunday afternoon at the Fitness Expo in the DT Hotel. I'm not going to lie, I've been extremely apprehensive about this race for the past two weeks. I think since I came back from holidays (where I didn't run for 2 weeks), and with the increase in temperature for the past few weeks, I've found it difficult to get back into the swing of things. 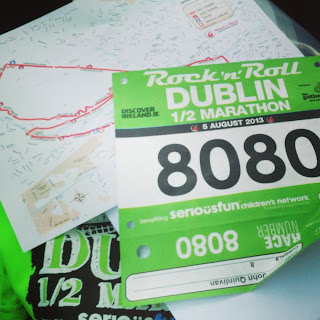 
The longest run I had managed to clock in the month of July was 15K and I had found that quite difficult. I was having one of my frequent 'Mind over matter' battles with myself in my head and it was only last night when I was on the phone to my other half that he convinced me to just run the race for the race - It doesn't matter that I beat a time or not as I can take what I've learned from this going forward. With those words resonating around in my mind, I slept sound last night.

That was until my alarm went off at 6am and I began my usual pre-race ritual. I had breakfast, a coffee and a shower to wake myself up properly and Brad, Rob and I headed in to Stephens Green just before 8am. Despite having pee'd about 4 times before we left, I found myself needing to pee again just before the race. It's probably nerves but I queued for 10 or so minutes for a port-a-loo (which are evil) before making my way to Corral #8 - my assigned corral for my estimated finish time of 2 hours. 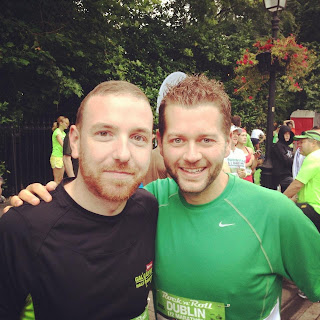 Myself and Brad before the race

I have to say, despite the volume of people at the start line (14,000) - this has been the best organised race I've taken part of. The baggage drop, the announcements, the line-up was all executed without a hitch. The race started bang on 8.30am and we were moved up along the empty pens while we waited for our whistle to go. I was a bit thrown with the fact the 2 hour markers were at the top of Corral 6 as I was planning on using them as my pacers for the race. They ran off into the distance while we were still waiting for the go!

The race took us from Stephens Green, along the quays, past Heuston and into Stephens Green with a band playing at every mile marker. The volume of people running the race certainly helped get me through the first third of the race as there was always something/someone different to look at. I loved the whole atmosphere of the race as there were a loads of people stopping to take photos of various landmarks like Áras an Uachtaráin or the Four Courts while others were running in fancy dress which really livened the general mood of the race.

As I ran through Phoenix Park and passed the first of many water stations, it dawned on me that I had forgotten to bring any gels with me - big mistake! Luckily as we turned out of the Park at Mile 7 (half way), they were handing out Gel Packs. I've read one too many horror stories from people online about trying something new on race day and it ending in disaster (usually involving them kacking themselves). I decided to disregard all of that and chowed down on the gel pack.

The second half of the race (from Mile 7 onward) was really enjoyable. We were back on the main roads around Chapelizod and Kilmainham. One of the runners ahead of me included a guy dressed as Pamela Anderson which really lifted the crowd as we ran through the streets. People were laughing and applauding and the mood just seemed to carry me along. Well, that and the two muscle-y tattooed men who were running in front of me :)

As I passed Mile 11 I knew I still had some fuel left in the tank so decided to push myself that little bit harder. I plowed on happy out and was excited to turn the corner and see the giant clock ticking away. Knowing I was so close to the finish, I ramped up to 5th gear only to realise that the electronic clock was in fact not the finish line. As I had already gained momentum, I decided to keep going at that speed as the end line had to have been just around the corner... It was around about 3 more corners. Either way, I crossed the line at 1h 57m (race time) which well exceeded my expectations.

My official chip time for the race: 1 hour 51 minutes 0 seconds 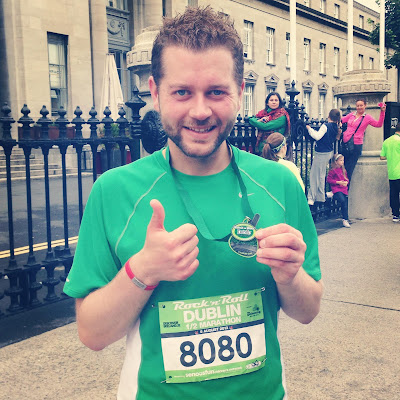 My brother Davy, Rob and Jonathan were waiting at the finish line which were a welcome sight. I was a bit of a sweaty mess but gave each of them a giant hug before tucking into a banana and energy bar they were handing out at beyond the finish line. We cheered Brad on as he passed the finish line a few minutes later before heading to Starbucks to get some much needed coffee and a chat.

All in all I'm absolutely delighted with today. I'm proud of my time and even prouder considering how unprepared I had felt for the race. I surprised myself today. I now have a few days recovery and smaller runs before my next race... which is this coming Saturday! Ah well, no rest for the wicked eh! 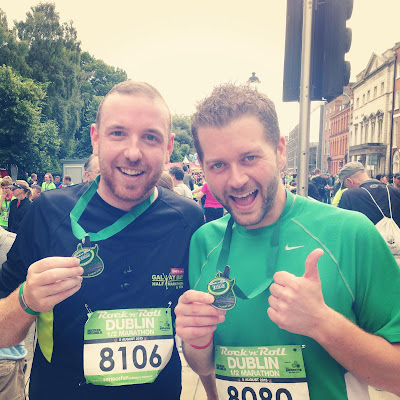