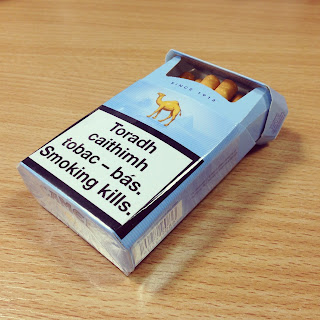 These are my cigarettes. Being a smoker is something I have never really thought about - I smoke, what's the problem? I had always said I would give up by the time I turned 30. Well, I turned 30 last November and here I am still smoking 20 a day.

I have often dabbled with the idea of quitting but I have usually brushed the idea off before I've given it a minutes consideration. For the past month however, the thoughts of quitting have been visiting me quite often, like the good angel of consciousness has been sitting on my shoulder constantly prodding me with her fairy wand.

I have finally decided I am going to quit. I have a number of reasons for quitting which primarily focus around my own health but also seeing the very real effect smoking has had on my grandfather has opened my eyes. My grandfather is an amazing man who just last week celebrated his 54th wedding anniversary to my grandmother. When I was leaving home on Sunday, I popped in to say 'Goodbye' before hitting the road and found my grandfather on the couch with a breathing mask on. 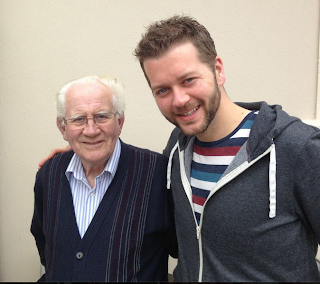 I see so much of myself in my grandfather... As the phrase goes: The apple doesn't fall too far from the tree. - and we are proof of that. Anyone who knows me/him will know the similarities I am talking about. Anyway, as I walked away all I could think about was myself. WHY AM I STILL SMOKING? My grandfather has been so proud of my running and every time I see him he asks me how far I've run (in miles). I remember going in to visit him in hospital the same weekend I had run my first 10K in March and he proudly sat up in the bed and told the guy in the bed opposite how I had "just run a marathon". Far from it, but I still appreciated the sentiment.

Twice in the past week, two people have separately said 'You are still smoking? I thought with all the running you were doing you had quit!'. They are right. I should quit. From a selfish point of view, if I don't smoke, my lungs will surely work more efficiently and I'll be a stronger runner for it. I'll have more money, my clothes won't stink and I'll be healthier. 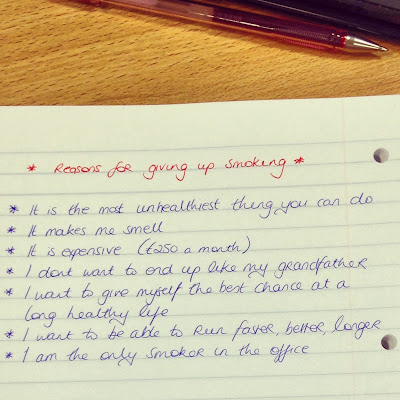 The Main Reasons why I should quit 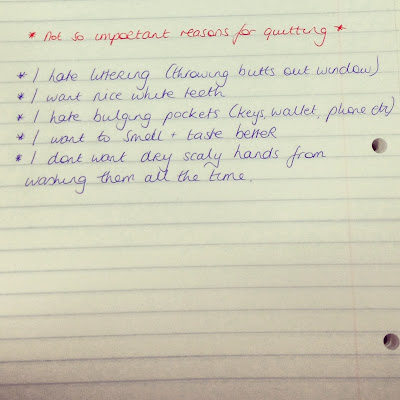 Secondary Reasons why I should quit

I know the next few weeks are going to be tough, but as I have said before in relation to my weight loss... The hardest part of any journey is turning up at the start line. I'm poised and ready for the start whistle to go off so I can start quitting.

My start whistle will go off as soon as I finish this box of cigarettes.